“This is the new Antisemitism”

to act against antisemitic content disguised as hatred of Israel.

The CEO of the movement that fights this phenomenon says: “The companies are trying but they can do a lot more.”

Like any other aspect of spreading messages, the revolution of the social networks dramatically affects the antisemitic discourse. The ease of spreading antisemitic content coupled with the late recognition by the social networks of their responsibility in this matter has turned the fight into a Sisyphean effort—similar to trying to empty the ocean with a teaspoon. Events like the Jerusalem conflict eruption or the Gaza military operation are certainly not helping in this fight.

A new report by the movement Fighting Online Antisemitism (FOA), which has a team of 60 volunteers, operating in 10 languages to monitor and detect antisemitic posts and report them, reveals how the main social networks (Facebook, Instagram, Twitter, YouTube and TikTok) find it difficult to apply an aggressive fighting policy against this phenomena.

The report monitored the above-mentioned social networks between April 2020 and April 2021, the year of the Corona which instigated a new wave of antisemitism. The conclusions are not very encouraging. For instance, on Twitter, with the largest number of detected antisemitic posts (36% in total), only about 15% were removed. On Facebook, of the 20% of detected antisemitic posts, only 18% were removed. The removal percentage of antisemitic content was somewhat better with YouTube (24%), Instagram (30%) and TikTok (42%).

In general, petitions by the FOA which communicates with the networks in an orderly manner is much more effective than the petition of a single person reporting offensive content and gains the increased attention of the networks. Only Twitter has removed more offensive contents as a result of petitions of single users than those of FOA petitions.

Tomer Aldubi CEO and founder of FOA says: “There is progress towards the goal of the FOA. Up to 6 months ago, Facebook would not act against Holocaust deniers; now they do. Following Facebook, TikTok does so as well. The social networks and the community they serve now understand that there is an acute issue with racism and hate on the networks in general and specifically regarding antisemitism. These days, the issues are at least being discussed. As a result, the networks do a lot to help fight online antisemitism, but they can do much more”.

Aldubi points to the weakness of the networks and their incapability to act on content that supposedly criticizes occupation but constitutes antisemitism. This includes, for example, posts which preach annihilation of the state of Israel or the spread of fake news that is aimed at delegitimization of the state of Israel. Aldubi stresses: “We do not focus on hate of the Israeli state, but there is a very thin line between the hate of Israel and antisemitism. This is the new antisemitism that we are going to experience in upcoming years. If someone wants to wipe out the state of Israel, it is not just a political issue. They actually want to annihilate 7-8 million Israelis.”

Aldubi continues by saying: “The networks are talking with us. They are working on their first steps regarding the subject of fighting online antisemitism. Yet at the end of the day, they will not act on it because they are concerned that such action will be conceived as infringement of freedom of speech. This worries me as this policy hurts us and spreads antisemitism.  If a Jew is beaten on the streets of New York and this content is posted online,

how does this relate to what is happening in Israel? There is no connection except that a person watches the information on the network and could think ‘because of the content I have seen, I have to beat up a Jew. Since the Jew which the networks depict is  in Israel and not close by, I will beat up the Jew in NY’. Please note that all posts which say, ‘I love Palestine’, although legitimate, elicit antisemitic talkback and reactions.”

When asked the question: “The networks must act against antisemitic reactions, true. However, even if criticism of Israel is not pleasant, isn’t it still legitimate?”,  Aldubi says that if the networks would have removed the offensive talkback and reactions it would be OK, but talkback posts are almost never removed. He points to what happened in the pedophile arena. There, it took a long time until the networks removed the aggressive and offensive videos, and by then, it was often too late. 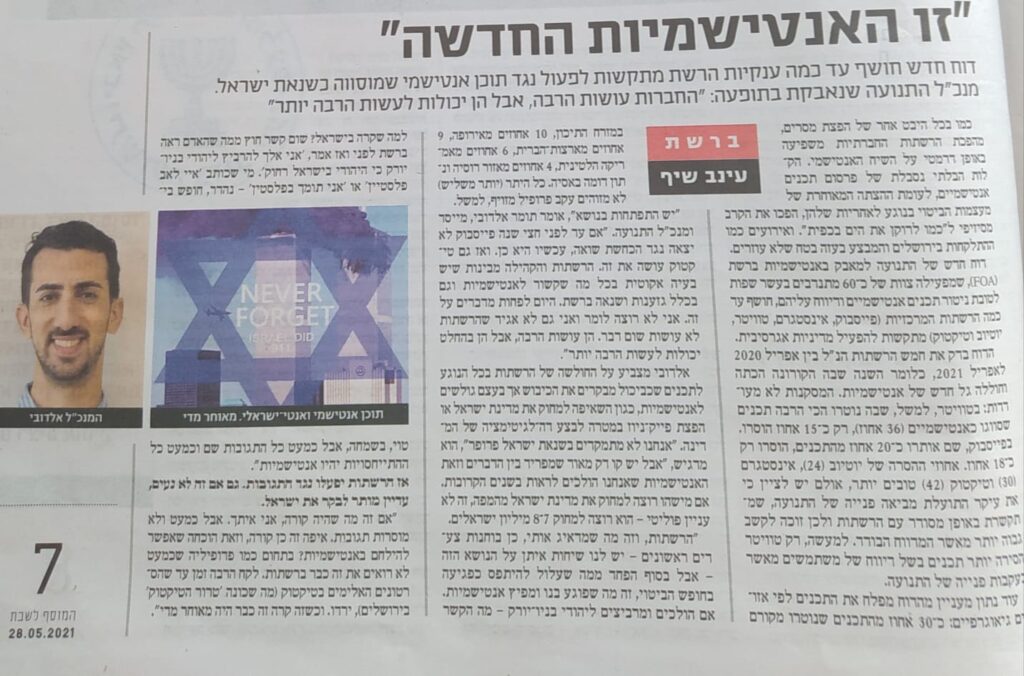